In January 2013, I joined Barnard-Columbia Design for America, part of a national network of student organizations that use human-centered design to help tackle problems that face their local communities.

To learn more I dug into the NYPD Motor Vehicle Collisions dataset (which at the time was a bunch of tables in PDF form, which was not fun), and I was able to visualize how widespread the issue was (see above).

Having established the severity and extent of the issue, my team went out into the field at 96th Street and Broadway. It is a large intersection, with the multiple lanes of traffic on Broadway divided by medians on either side of 96th. The southern median includes the entrance to the subway station, which generates a lot of incoming and outgoing foot traffic. We observed the intersection extensively, and compared it to the more standard intersection nearby at 96th Street and Amsterdam Avenue.

We noticed that pedestrians crossing on the north side of 96th and Broadway would often get stranded at the median. They would then try to get to the subway stop on the other side of 96th Street by crossing in the middle of the intersection, where their path would come into conflict with turning vehicles.

The NYPD, prompted by the recent pedestrian deaths, had apparently noticed the same pattern. Their attempt at a solution was to put up barriers along the median so as to deter would-be jaywalkers. All that seemed to do was temporarily annoy pedestrians, who would climb over the barriers and cross the street regardless.

After going over our observations and generating several potential solutions, we settled on one that we felt would have the largest impact to effort ratio. If the pedestrians insisted on acting as if there was a crosswalk in the middle of the intersection, the human-centered solution was to put a crosswalk there! It was a classic case of a [desire path](http://99percentinvisible.org/article/least-resistance-desire-paths-can-lead-better-design/ "desire path overview"), but with higher stakes.

The Story So Far:

A few days after coming to this conclusion, we received a Google News Alert about the intersection. The New York City Department of Transportation had just proposed our exact solution to the community board, and would be moving forward with it soon.

Rendering of the crosswalk from the announcement, along with some temporary traffic police to enforce the new traffic pattern: 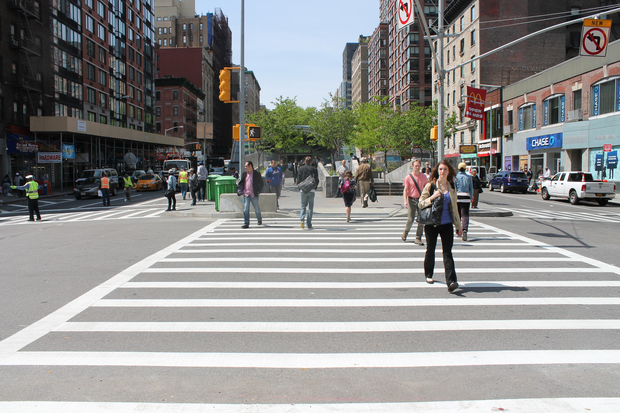 It was a fantastic moment for the intersection, and a moment of validation for our team. If we could spend a few hours at a broken intersection and come to the same conclusion as a team of professionals, we must have been doing something right. I was especially struck by how well the process of observing the users directly to decide on a course of action worked. While it may have been a relatively straightforward issue, it was the perfect demonstration of how human-centered design works for someone who was just discovering the field.